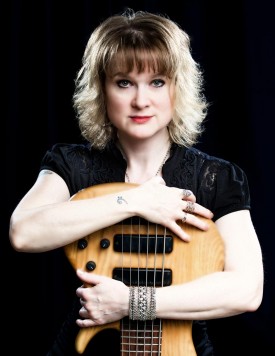 Lisa Mann hails from blues-soaked Portland, Oregon.  Originally from West Virginia, Mann’s vocals effortlessly straddle the line between the honey sweet warmth of the south, and the force-of-nature sound Mann has cultivated by mastering everything from hard rock to rhythm and blues. Her clever blues and Americana balladry is complimented by her considerable prowess on bass guitar. Her bass grooves deliver the solidness of a Muscle Shoals Swamper or a Funk Brother.

Her influences run the gamut, from low down blues sisters Etta James and Koko Taylor, to singer-songwriters like Bonnie Raitt and R&B belters like Little Milton. She writes the majority of her recorded material, and her songs paint pictures of a gritty (and sometimes humorous) personal experience in life, love and the not-always-pretty music business.

Lisa has shared the stage with many Northwest greats, such as the late Paul Delay, Lloyd Jones, Kevin Selfe, Duffy Bishop, Karen Lovely, and Sonny “Smokin’” Hess. She has often lent her bass grooves and musical direction to Sonny Hess’ NW Women’s Rhythm and Blues Revue, a very popular showcase at festivals such as the Waterfront Blues Fest, and at Musicians for the Cure’s annual cancer charity Christmas show.

Lisa’s vocals appear on Canadian blues master Bill Johnson’s Juno Award nominated CD, Still Blue. (www.billjohnsonblues.com), as well as on the soundtrack to the movie Woodstock or Bust (2019). She also lent her voice and bass to acclaimed symphonic rock project Cry for Eden. (www.cryforeden.com), and has released a traditional metal album The Poisoner under the pseudonym White Crone (www.whitecrone.com)