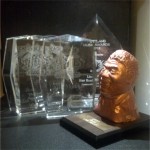 The CBA Muddy Waters Awards will take place at the Melody Ballroom in Portland, OR on Thursday, November 1st.